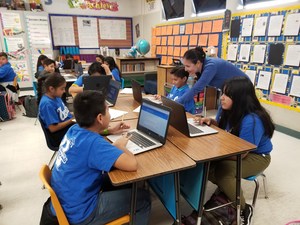 Campus is one of 326 elementary schools across California deemed eligible for the first California Distinguished School designations awarded since 2014.

The school was chosen because of exemplary academic performance by all student subgroups, including that of English learners, low suspension rate and other indicators on the fledgling California School Dashboard, a collection of academic and school climate measures.

Just 326 of the state’s more than 5,800 elementary schools were deemed eligible to apply for this year’s award.

“All of us at Baldwin Park Unified are thrilled with Kenmore Elementary School’s determination of eligibility,” Superintendent Dr. Froilan N. Mendoza said. “This is a testament to the incredible work of our team at Kenmore and an inspiration to our teams at our other campuses.”

The distinguished school program has been on hiatus since 2014, when the state stopped using its Academic Performance Index (API) as the primary criterion. The API generated a single number for school performance based primarily on standardized test scores.

The program was discontinued while California developed a dashboard of performance measures to replace the API, including standardized tests aligned with the new California Standards, absenteeism and suspension rates, English learner progress and graduation rates.

During the interim, the state honored Gold Ribbon schools for pursuing educational initiatives aligned with the California Standards.

Kenmore has 540 students, of whom 91.9 percent are identified as socioeconomically disadvantaged. More than a quarter are English learners.

The school earned the state’s highest performance level – blue – for achieving a suspension rate of 0.2 percent. It achieved the second-highest rating – green – for helping 76 percent of English learners make progress toward English proficiency. Green ratings were also awarded for the school’s performance on the state’s English language arts and math standardized tests.

“Being selected as one of the few eligible elementary schools in California is honor,” Kenmore Principal Jane S. Sattari said. “We are immensely proud of the work we do on behalf of our students every day and pleased to know that their success is being noticed.”

Schools have until March 12 to apply for the honor. The state will then conduct site visits and announce the winners at the end of the month.

BPUSD_KENMORE_1: Kenmore Elementary School teacher Raquel Gonzalez works with students to complete a response to literature. The students are clad in UCLA gear as part of the school’s effort to foster a college-going culture.