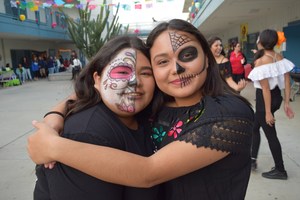 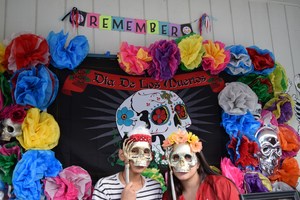 Día de Los Muertos, Day of the Dead, is an annual celebration of remembrance for dead family members, friends and cultural icons. The event was staged by the school’s Spanish-English Dual Language Program with help from campus clubs.

“Día de Los Muertos is an important tradition embracing the Mexican culture of remembering the people who came before us – not just family members, but also role models who meant something to society,” Baldwin Park High School junior Ashlie Chaidez said. “It’s also a way to honor Latinos who represented their community and took important societal stances.”

The event featured 12 altars in the school’s quad area to emphasize the importance of multiculturalism, education, equality, the performing arts and activism. The student-made altars featured individuals such as educator Jaime Escalante, musician Selena Quintanilla-Perez, and actor Roberto Gomez Bolaños, as well as shining a light on social concerns such as bullying and domestic violence.

Baldwin Park High senior and Movimiento Estudiantil Chicanx de Aztlán (MEChA) member Esmeralda Ochoa said the event has personal importance since she was celebrating the lives of her great-grandmother Elvidia Zavala and her brother, Alejandro Zavala.

“This holiday means everything to me because it’s an important way to keep my dead family members memories alive,” Ochoa said.

Ochoa helped create the altar for Jaime Escalante, believing his plight in helping Garfield High students learn calculus and algebra to be a significant occurrence for the Latino community.

Fontana resident Robert Moscozo said he was amazed by the traditional Mexican entertainment and food available at the event. Moscozo, a relative of a Baldwin Park High teacher, said the event was a fun way to celebrate and teach Mexican traditions to students and adults while also honoring his own family members.

“It’s important to remember my relatives to keep their spirits alive, so I’m here to remember my grandpa and my uncle,” Moscozo said. “They were both always happy, helpful and cheerful and it’s a great day to remember what they meant to me.”

“I think this Día de Los Muertos event is an amazing way for all students to celebrate Mexican culture,” Vargas said. “Events like this support the whole community and make people come together like a family – from the little elementary students all the way to the high school kids.”