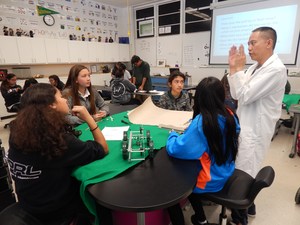 The awards, which have temporarily replaced the California Distinguished School Program, go to secondary campuses that successfully implement new academic content and performance standards for all students, including English learners, as demonstrated through model programs chosen by the schools.

In all, the state honored 193 middle schools and 180 high schools.

“These awards are a clear and resounding validation of Baldwin Park Unified’s student-oriented programs on many levels,” Superintendent Paul J. Sevillano said. “Educators at our schools are constantly working to find new and better ways to support students on their journeys to success.”

The Gold Ribbon program is intended to run for two years, providing the state with an interim way to recognize excellence while California adopts new statewide assessments in math and English language arts (ELA) aligned with the California Common Core.

The former assessments were used to generate the state’s Academic Performance Index score for each school – a figure that helped establish eligibility for the Distinguished Schools program.

But California dropped its ELA and math assessments in 2014 while it tested a new system that went into effect this spring. The state also put the API on hiatus while it builds a new model for determining school success that is broader than the test-score driven tool previously used.

Unlike the Distinguished Schools program, Gold Ribbon applicants nominate themselves. But both systems include site visits by a team of educators as part of the final determination of winners; both also rotate annually between secondary and elementary schools.

The model programs targeted by the Gold Ribbons echo some of the new state measures for school improvement required under the Local Control Funding Formula, an overhaul of school finance in 2013-14 that tied additional revenue to high-needs student groups, such as English learners, foster children and socio-economically disadvantaged students.

Schools are to show model programs that improve student performance under the Common Core for ELA and math, California English Development standards and Next Generation Science Standards. The programs should feature standards-based activities, projects, strategies and practices that other schools can replicate.

Holland Middle: The school was honored for its use of a lesson study model that enables teachers to continually tailor science instruction to student needs based on review of data. The effort was created in partnership with Occidental College, which provided funding, materials, substitutes during training and staff to score, analyze and report pre and post assessment data.

The lesson study system hits several Common Core goals, including collaboration among students and critical thinking. Since 2012, special education students and English language learners outperformed peers on the state’s science test. Overall, the percent of students scoring advanced on the state science test has more than doubled since the program was established.

Jones Junior High: The school was honored for creating a college-going culture supported through a variety of programs. Efforts range from Geared UP for College, a college and career readiness program funded through a grant from California GEAR UP. As part of that program, the school offers a pre-Advanced Placement pilot program called SpringBoard.

Jones reinforces college options with an annual College Week that includes a college fair, an annual panel of college students who describe their experiences to more than 150 students, a partnership with Kaiser Permanente to encourage exploration of medical careers and a program to boost parent-school communication called the Parent Institute for Quality Education. In the last two years, nearly 200 parents have taken part in the institute.

Olive Middle: The school was honored for its dual-language immersion program where students are taught to be biliterate in Spanish and English from pre-kindergarten through 12th grade. The program begins with instruction focused mostly in Spanish, gradually adjusted over the years until it is 50 percent Spanish and 50 percent English. According to school data, students in the immersion program outperform their peers in GPA and the percentage who enroll in honors classes.

Sierra Vista Junior High: The school was honored for an intervention program designed to improve student success. The tiered program targets struggling students depending on their level of need, launching specific countermeasures for students each of three levels. Data shows 88 percent of the students boosted their GPA and 91 percent of those students were able to sustain the improved performance the following semester.

Baldwin Park High: The school was honored for its Academies, smaller learning communities developed over 10 years that help connect students and teachers to boost enthusiasm and accountability. The high school has three academies: engineering-robotics, sports medicine and business technology. The academies were generated through review of student needs. As a result of the academic model, Baldwin Park High’s Academic Performance Index score rose to 631 from 609 while truancy and dropout rates declined.

Sierra Vista High: The school was honored for its parent engagement program, launched to help ensure parents could work as partners with their students to ensure success. The school engages parents through the Parent Institute for Quality Education and the use of smaller learning communities. School leaders credit the effort with helping to reduce failing grades and in-school suspensions.