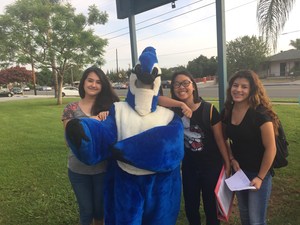 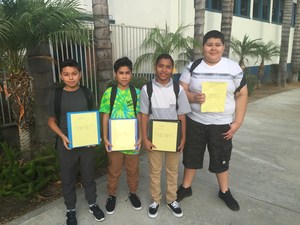 Baldwin Park Unified welcomed 14,000 students for the start of the 2016-17 school year on Aug. 11 with new and expanded programs in science, technology, engineering and math (STEM), new classroom digital tools, expanded college-preparatory programs, and a smartphone app that will provide parents with a new channel for school information.
BALDWIN PARK – Precious Lemus, 12, delivered a boatload of high-fives at Jones Junior on Thursday, though not all of her friends knew they came from her.
That’s because Precious was dressed as the school’s Blue Jay mascot – part of a push by school leaders to create a celebratory atmosphere for new seventh-graders and returning eighth-graders at the Baldwin Park Unified campus.
“It’s exciting to be back,” said fellow eighth-grader Lizeth Villavicencio after giving Precious a big hug. “I love this school and I haven’t seen my friends in a long time.”
Jones is one of 20 schools at Baldwin Park Unified that welcomed back about 14,000 students on Thursday, a day of new beginnings from transitional kindergarten to high school.
New Jones seventh-graders Manuel Mendez, Anthony Garcia, Kris Vazquez and Julian Mendez greeted each other with joyful shouts. Most hadn’t seen each other since the end of year at nearby Vineland Elementary, one of the junior high’s three feeder schools.
Together, with more than 450 new classmates, the boys trooped through a balloon-festooned entry on their way to their new classes.
At Sierra Vista High School, more than 500 freshmen were greeted by members of a newly minted Link Crew, a team of 96 juniors and seniors trained over summer on ways to connect with the new kids.
“It’s all about building relationships,” said Link Crew Coordinator Eric Pinal. “Students who feel more connected to school have greater success and higher graduation rates.”
Link Crew members met with freshmen on Tuesday for a four-hour orientation and campus tour. Teams of two Link Crew members were assigned groups of 10 students each. Their task: Engage the new students, let them know about clubs and campus opportunities.
“I want to help these freshmen find their place here,” said Link Crew member Dania Duran, 16. “I remember as a freshman, I was so nervous, I was so lost.”
Duran said she helped new freshmen on Thursday find classes and gave them tips about teachers. For students who were uncertain about high school, she talked until she could see they felt welcomed and comfortable.
Transitions were also a focus at Tracy Elementary, where Principal Erika Valenzuela and her team of teachers gathered kindergarten parents and children for a morning assembly.
The new kindergarteners clapped and cheered at Valenzuela’s prompting while their parents received information about school operations.
Daisy Castro said her son, Noah, was excited to start kindergarten. Noah, 5, said he likes his new classroom and can’t wait “to learn new stuff.”
Nicole Alcaraz said her daughter, Arianna, was also ready for her first day.
“She’s a good listener and she was really ready for this. She loves school. She wants to learn and make new friends,” Alcaraz said.
PHOTOS
BPUSD_Firstday1: Returning eighth-graders cluster around their friend, Precious Lemus, dressed as Jones Junior High’s Blue Jay mascot on Aug. 11, the first day of school for Baldwin Park Unified
.
BPUSD_Firstday2: New seventh-graders Anthony Garcia, 11, Kris Vazquez, 11, Manuel Mendez, 13 and Julian Mendez, 12, show their class schedules on Aug. 11, the first day of school at Jones Junior High in Baldwin Park Unified.
BPUSD_Firstday3: Daisy Castro and her son, Noah, 5, were more than ready for the first day of school, Aug. 11, at Tracy Elementary School in Baldwin Park Unified.
BPUSD_Firstday 4: Tracy Elementary kindergarteners sit together making friends on Aug. 11 while school leaders brief parents during the first day of classes at the Baldwin Park Unified campus.