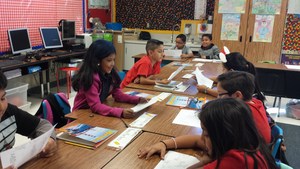 The Baldwin Park Unified campus is cited as one of six stellar schools in the college-readiness program’s 2016 annual report, released in conjunction with an annual convention held Oct. 20-21.

“Kenmore Elementary School is an excellent example of how our talented and dedicated teachers can make a significant difference in the lives of their students,” Baldwin Park Unified Superintendent Froilan N. Mendoza said. “Congratulations to Kenmore’s team and students for this achievement.”

Kenmore, part of NEU’s network since 2009, runs a literacy integration program that draws on a tool called Thinking Maps and a companion writing program called Write from the Beginning and Beyond. The tools also were instrumental in the school’s recognition as a 2016 California Gold Ribbon School.

“We’re on fire,” Principal Jane Sattari said. “It’s pretty amazing to see our children respond. By the end of the year, our kindergarteners write – not just one of two sentences, but many sentences. And it just goes up from there. When the Gold Ribbon team visited last year, they said our sixth-graders are writing at the level they expect of middle school students.”

“We have a firm belief that if you can write about what you read, your understanding is deeper,” Sattari said.
At Kenmore, the program first focused on helping speed the transition of English learners to English proficiency.

“Since they began implementation in 2010, more than 203 students have been re-designated. This is the highest number of re-designated students in their school district,” the report states.
Kenmore extended the program to all student groups, boosting achievement across the board. And then something unexpected happened.

“It also helped the parents of their students,” the report states. “A mother of a Kenmore student attended a series of six Parent Universities at Kenmore to learn about Thinking Maps and Write from the Beginning and Beyond.”

The parent used the systems to prepare for a citizenship test and to organize an essay for a job application.

The combination of successes inspired No Excuses University to call out Kenmore as one of six success stories from among 249 schools in its network. NEU promotes a college-going culture at member schools starting in the primary grades.

NEU Founder Dan Lopez said Kenmore and the other schools “exemplify the heart of who we are as a group of people who quite simply just love kids.”

102616_BPUSD_NEU: Students at Baldwin Park Unified’s Kenmore Elementary use Thinking Maps to visualize thought processes, which in turn prompts a higher level of critical and creative reasoning. The school is being celebrated for its effectiveness by No Excuses University.