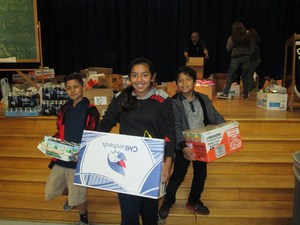 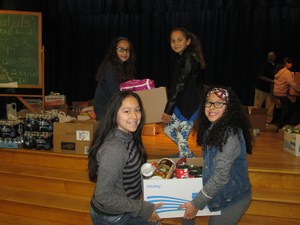 Central, one of 11 Baldwin Park Unified schools participating in the drive, collected 5,260 cans during the effort. The figure – nearly double the number Central raised in 2015 – may stem from a competition created by student leaders that awarded the top class in each grade with playground equipment and the top students with a special lunch with the principal.

“I’m so proud of our students at Central and all of our schools that helped collect food for the city’s neediest residents,” Superintendent Froilan N. Mendoza said. “These efforts teach students to appreciate the challenges faced by members of our community, engendering empathy and compassion.”
Other participating schools include De Anza, Elwin, Foster, Geddes, Heath and Walnut elementary schools, Holland and Olive middle schools, and Jones and Sierra Vista junior high schools.

The city’s food basket program was launched nearly two decades ago and distributes up to 400 baskets each year. Recipients – who are limited to one per family and must show proof of income and city residency – receive a box filled with produce, chicken, tortillas, cheese, apples and other fare.

Primary contents of the baskets are donated by Navidad en el Barrio, a nonprofit organization, and are supplemented with the canned goods donated by Baldwin Park Unified families and staff. Each basket can weigh as much as 50 pounds.

Baskets were distributed on Dec. 10.

122116_BPUSD_FOOD_1, 2: Students at Baldwin Park Unified’s Central Elementary School collected nearly twice as many cans of food for an annual holiday food drive as they did in 2015 after student leaders created an incentive program.