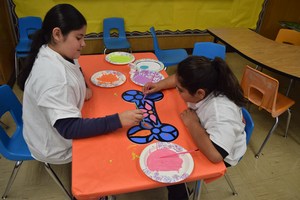 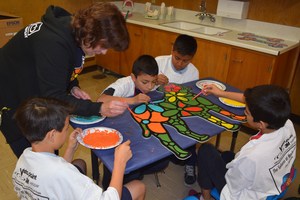 Students at Baldwin Park Unified’s Bursch Elementary School created artwork on Dec. 12 and 13 to beautify Los Angeles County animal shelters during the first stage in a national campaign launched by nonprofit Portraits of Hope to promote pet adoptions. Students painted wooden cutouts of animals and abstract images to decorate the shelters. Bursch is one of just two Los Angeles area schools participating in the program thus far.
BALDWIN PARK – Students from Bursch Elementary School added their own creative touches to a county-wide “Portraits of Hope” art initiative to beautify and visually revitalize animal shelters, painting prefabricated designs of dogs and rabbits during a two-day art workshop on Dec. 12 and 13.

Once finished, the cut-out designs, illuminated with colorful flowers, will be displayed at animal shelters throughout L.A. County, including the Baldwin Park location. Bursch is one of only two Los Angeles schools participating in the program.

“This project really resonates with our students,” Bursch Elementary special education teacher Stacey Ranger said. “The students are creating art that the entire community will be able to appreciate. Our kids are very excited about playing such a critical role in the initiative.”

All Bursch students, from transitional kindergarten to sixth grade, participated in the civic art project, which also encouraged student feedback on how to allocate resources and solicited ideas on how to improve the lives of millions of people around the world.

Founded by Ed and Bernie Massey, “Portraits of Hope” is a privately funded nonprofit organization dedicated to bringing public art to the masses. In 2015, the Massey brothers invited 40 Bursch students to their El Segundo art studio to assist in painting the huge orbs that made up the “Spheres at MacArthur Park” installation.

For the animal shelter revitalizations, Ed Massey designed hundreds of animal-themed cut-outs for Bursch students to paint at their campus. In July, the L.A. Board of Supervisors unanimously voted to install the art at county shelters to promote pet adoptions by making them more inviting to the public.

Bursch sixth-grader Ramon Morales contributed to the “Spheres” project and attended the installation event with his parents.

“I am very proud to have worked on this,” said Morales, who added that the new project holds special value for his family. “We have a Chihuahua at home. It’s a rescue dog.”

To broaden the scope of the art project to conform with Bursch’s standards-based curriculum, elements of critical thinking and collaborative learning were added. Students were asked to voice their opinions on what social issues concerned them the most and to list everything they wanted to accomplish in the next 30 years.

Among the concerns were health issues, crime, homelessness, child abuse and animal abuse.

“My topic is homeless dogs,” sixth-grader Jessica Tapia wrote. “If you were a dog, you would not want to be without a home. So take a dog or two and give them a lovely home.”

Bursch students were also given a photocopy of a $100 bill, divided into 14 areas of need such as health care, infrastructure, animal rights and ethnic relations. Students were asked to choose what percentage of money should go to a specific area of need.

“Baldwin Park is honored to be part of Ed and Bernie Massey’s civic beautification initiative,” BPUSD Superintendent Froilan N. Mendoza said. “What makes this project so significant is that we are asking our students to think about social issues and compelling them to visualize their future and encourage communication and collaboration with others.”