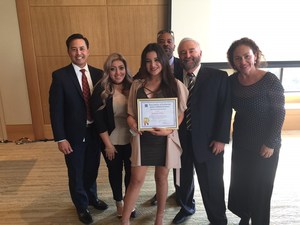 Now, she is poised to graduate early with a strong academic record and perfect attendance.

For her resiliency in the face of adversity, Flores, 17, has received an Every Student Succeeding Scholarship from the Southern California chapter of the Association of California School Administrators. The 24, $100 scholarships, awarded in November at the Huntington Library, honor students who exceed expectations.

“Gabriela Flores exemplifies the spirit of Baldwin Park Unified’s students – showing courage no matter how great the challenge and a wellspring of dedication to learning,” Superintendent Froilan N. Mendoza said.

Flores has lived in Baldwin Park her entire life, maintaining her positive focus despite an unstable family situation.

In elementary school, she and her mother could not afford an apartment, so they made due with a converted garage. In high school, she required an appendix operation, so she scheduled it for a Friday afternoon and was back at school on Monday – keeping her attendance record intact.

Then, during her sophomore year at Sierra Vista High School, she and her mother traveled to Mexico for the winter holidays. On their return, Flores, a U.S. citizen, passed through customs and immigration checks without issue. Her mother – who possessed a visitor’s visa – was sent back to Mexico because her passport was close to expiring.

Flores, then 15, and alone in the airport, wasn’t even informed. She tracked down customs officials who, after several hours, let her know a few hours before dawn that her mother had been deported.

That Monday, despite the traumatic event, she was back at school.

“I missed my whole junior year. I decided to come back because I have my goals. It was hard, but I want to make something of my life,” Flores said.

For a while, her home life remained unstable, but Flores still leapt into summer school to make up missed credits. This fall, she enrolled at North Park, a California Model Continuation High School, surging ahead in credits by taking online courses in addition to a heavy course load that includes chemistry, algebra, two history classes and two English classes.

“They’ve been there for me from the beginning,” Flores said. “They motivate me each and every day. I don’t know how to thank them.”

Orick said the credit goes to Flores, who remains positive no matter what challenge she faces.

“She’s a wonderful example of how our continuation school program can help a student achieve her goals. She’s dedicated, optimistic and works diligently no matter what,” said Orick, who joined Pratt in nominating Flores for the scholarship.

Flores said after her graduation, she plans to enroll in Mt. San Antonio College en route to a four-year university and a master’s degree in occupational therapy.