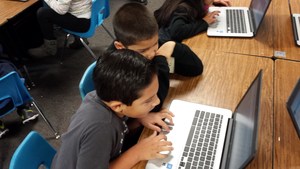 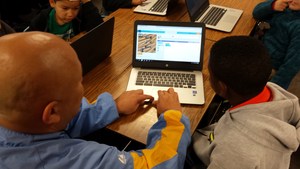 “This is a great program that encourages our students to see the world through a new perspective, to realize they possess the ability to create in the technical sphere no matter how young they are,” Superintendent Froilan N. Mendoza said. “Coding is likely to become a foundational skill as our job market becomes increasingly technical.”

Central Elementary, which pioneered the effort for Baldwin Park in 2015, engaged all of its 508 students during events spread across the week. Students coded in the school’s computer labs from 8:10 a.m. to 2:45 p.m. daily.

The school prepared for the program with inspirational assemblies last week, showing students careers in coding and teaching them about a 7-year-old who is the youngest game coder. Central students also participate in a STEM Saturday School that infuses students with an extra dose of science, technology, engineering and math instruction.
Principal Esther Garcia said she includes all students because of the potential for coding to become a foundational job skill. Many of the students who participated in the 2015 event now code on their own, Garcia said.

About 125 Vineland Elementary students in second through sixth grades also took part in the event. Teachers at the school used the program to reward hardworking students in each classroom, those who have shown the most growth academically or socially. The event was held for an hour each day.

The Hour of Code was introduced in 2013 by nonprofit Code.org, which organized the event during Computer Science Education Week. Computers are everywhere, but fewer schools teach computer science than 10 years ago. Girls and minorities are severely underrepresented, according to Code.org.

BPUSD_CODE_1: Vineland Elementary second-graders learn coding during the annual Hour of Code, an international effort to promote computer science education. Vineland students are engaging in the program throughout the week.

BPUSD_CODE_2: Teacher Gilbert Mendoza helps Vineland Elementary second-graders as they learn to code during the annual Hour of Code, an international effort to promote computer science education. Vineland students are engaging in the program throughout the week.