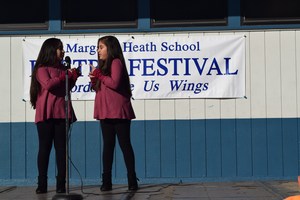 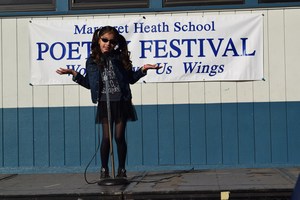 From transitional kindergarten to sixth grade, students recited short poems which touched on a variety of subjects ranging from video games to Walt Disney characters.

The recitals included five Margaret Heath students who read their own original compositions.

“This is one of the most fun days of the year,” Margaret Heath Principal Maria Alonso said. “The students are so supportive, cheering each other on. I am so proud of our Huskies!”

The recitals were short, often less than a minute, with students employing props and embellishing their performances with creative flourishes. Some students recited in English; others in Spanish.

Fifth-grader Kimberly Martinez enlisted her twin sister, Eileen, for a reading of “Two by Two.” Second-grader Isaiah Montes read “I am the Skeleton” while wearing a skeleton T-shirt and gloves.

“I like skeletons,” Montes said, adding that he doesn’t get nervous performing in front of the school. “I’m not scared because they are my friends.”

“I followed an AABB pattern for my poem,” Hernandez said. “I really like my school and my classmates and teachers. I wrote the poem for them.”
MORE

The poetry festival is greatly anticipated each year, with all grade levels conducting their own poetry contests, judging participating students on memorization, clarity, expression and originality. The top three from each grade were selected to read in front of the school during the special morning assembly.

Inspired by a retired Margaret Heath teacher, Tonya Cuccia, the poetry festival has been a tradition at the school for 20 years. Cuccia wanted to provide students with an opportunity to appreciate and create a special literary work, while recognizing the style, rhythm and beauty of poetry.

“I am greatly impressed by the mastery of the material and the dynamic performances delivered by the Margaret Heath students,” BPUSD Superintendent Froilan N. Mendoza said. “The hard work, dedication and diligent preparation of the Margaret Heath faculty, staff and student body is tremendous. Congratulations for a job well done.”