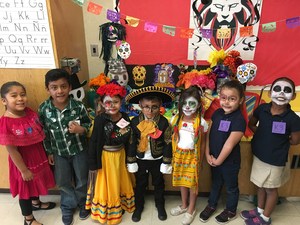 The award recognizes Geddes, which offers a dual-language program in Spanish, for its commitment to graduate students who are bilingual, biliterate and culturally diverse.

“We are tremendously proud of our team at Geddes for earning the Seal of Excellence,” Baldwin Park Superintendent Froilan N. Mendoza said. “It is a testimonial to the quality of Geddes’ academics and the dedication of its teachers and staff.”

Teachers at Geddes work together to develop lessons, analyze student performance data, engage parents and collaborate with other dual-language schools. Students are clustered in small instruction groups to focus on specific language needs.

“Dual Language is not just a program at Geddes Elementary, it is an experience for our students to progress academically while increasing their bilingual, biliterate and bicultural skills, knowledge and competencies,” Principal Irene Garcia said. “This program creates a foundation as we prepare our students for the global society they will encounter as young men and women.”

The school surpassed the state’s 800-point threshold on California’s Academic Performance Index in 2010, and remained above that level through 2013 – rising to 828 before the school quality measurement tool was retired.

Dual-language students consistently perform at comparable of above proficient levels on state tests in comparison with other students, including on the new, more rigorous Smarter Balanced Assessments in English language arts and math.

The school reports significant success in reclassifying English learners as fluent English proficient and in the acquisition of Spanish skills among its native English speakers.

In a letter announcing the award, CABE CEO Jan Gustafson-Corea praised Geddes for its commitment to educational excellence.
“CABE is proud and motivated by the work you do each day to provide your students and school community with the highest caliber of education along with a strong vision for biliteracy,” Gustafson-Corea wrote.