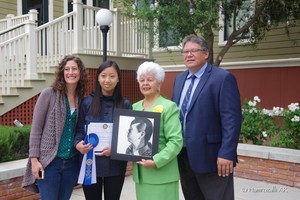 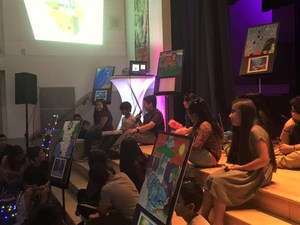 Add dozens of Matisse-inspired fishbowl paintings, Native American ceramics, Picasso-style masks and multimedia collages. Mix in the thrumming and drumming and poetry of more than a dozen performance artists.

Now, put it all in an artistically lighted room filled by about 200 students, parents and teachers, and you’ll have just a little sense of the impact of the Technology Enhanced Arts Learning (TEAL) gallery staged April 12 at Margaret Heath Elementary School.

TEAL is a pilot program brought to Heath and Geddes elementary schools through a partnership with the Los Angeles County Office of Education. A teacher at each school was trained in ways to integrate art into core curriculum – from language arts to science, math to social studies.

Each teacher coached 10 teachers, bringing the program to more than 500 students in 22 classrooms, focusing on visual arts. Navarro’s daughter, Geddes fourth-grader Emily Torres, painted a Chagall and wrote a poem from the perspective of a paintbrush.

“Art is something our students all feel comfortable talking about. There are no wrong interpretations. As a result, they grow in their confidence,” said Cynthia Milian, Geddes Elementary School’s TEAL coach. “It inspires them to be creative.”

The gallery included connections made to core subjects. Images of Chagall works, for example, were accompanied by original poems and photos of students imitating the artwork. Geddes third-grader Jose Enriquez served as a “living statue” of van Gogh, recapping the artist’s life for visitors.

“This is an extraordinary display of the power of imagination when it is coupled effectively with our core curriculum,” Superintendent Froilan N. Mendoza said. “You can see how the art inspired students to discover their voices and drive their academic success.”

The gallery wasn’t originally a part of the TEAL program. It was inspired by a classroom gallery that 16-year Heath Elementary teacher Laura Reyes has created annually.

Reyes, who teaches a fifth-/sixth-grade Spanish dual-language class, because of her background in arts integration jumped to TEAL’s second-year curriculum – performing arts. Her students chose nature themes, wrote poems, chose musical beats to accompany their poems, created instruments to produce the beats and performed the poems live during the gallery.

“It was so much fun. They had a blast,” Reyes said.

Sixth-graders Damian Alcala and Adrian Ortiz performed a poem about a lion who, among other things, chewed on shoes. Alcala, the poem’s lead writer, said he liked the imagery they created.

“It’s unique. It’s kind of funny – a lion wouldn’t normally do all these things we said,” he said.

Ortiz said he connected with the drumming, which built on his love of music.

“I learned there are different ways to pursue art and different ways you can feel while you play the instruments,” said Ortiz, who said he often relaxes to the music of Verdi’s “Rigoletto” opera.

BPUSD_ART_1: Geddes Elementary fourth-grader Emily Torres stands next to her interpretation of a Chagall self-portrait displayed with a poem she wrote from the perspective of a paintbrush during an April 12 art gallery celebrating a yearlong effort to integrate arts into core curriculum at two Baldwin Park Unified elementary schools.