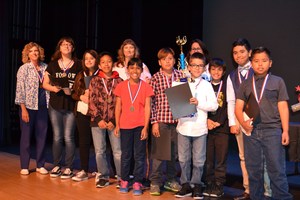 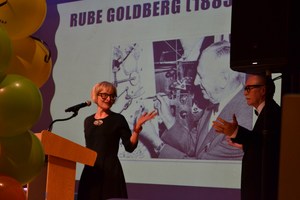 Students and their families packed the center for a showcase of videos from the contest, which spanned 12 Baldwin Park Unified elementary schools. The competition replaced the District spelling bee – a shift representative of a growing focus on science, technology, engineering, arts and math (STEAM) fields.

“We modeled our 21st Century Challenge after college-level contests, hoping to inspire our students to step beyond any preconceived limits and teach them that all possibilities are within their reach,” Superintendent Froilan N. Mendoza said. “And they did just that.”

In fact, competition was so fierce that the District scrapped plans to award only first- and second-place prizes, adding honors for third place and two honorable mentions.

“They far exceeded my expectation,” said event organizer Susan McNamara, a teacher on special assignment who has long helped lead Baldwin Park Unified’s Gifted and Talented Education (GATE) program. “They were so good.”

The schools worked on the competition all year, starting with introductory lesson plans created by McNamara. The contest was inspired by the clever contraptions of the longtime newspaper cartoonist Rube Goldberg, who was himself a UC Berkeley-educated engineer.

In fall semester, each school created a team of 10 students from grades four, five and six, with the limit that no more than half the students could be part of the GATE program. Students were required to apply to take part in the after-school program and had to obtain recommendations from teachers.

The machines use recycled materials gathered by the 120 students, who created simple machines – such as levers and pulleys – that work together to extract the tissue. Students created two-minute videos demonstrating their machines as well as three-minute videos explaining their effort and teamwork.

At the showcase, Assistant Superintendent of Student Achievement Dr. Randy Gray dressed as Rube Goldberg and acted as master of ceremonies. Each team selected students whose skill sets help moved its project along to be honored with a Pathway to Purdue certificate. The top three teams received school trophies and medals for team members and facilitators.

BPUSD_21st_2: 21st Century Challenge organizer Susan McNamara announces awards during a showcase of videos created by students of their projects; to her right stands Assistant Superintendent of Student Achievement Dr. Randy Gray, who dressed as Rube Goldberg to act as master of ceremonies.