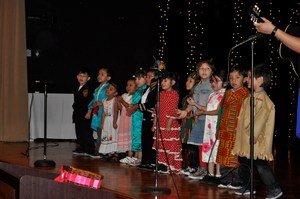 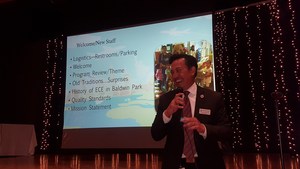 BALDWIN PARK – A troupe of 12 preschoolers dressed to represent an array of cultures celebrated the advantages provided by Baldwin Park Unified’s Early Childhood Education (ECE) program through a montage of songs on April 27.

The children’s performance was the highlight of the program’s 17th annual Family and Community Partnership Recognition Luncheon and a keen reminder for the more than 120 school leaders and community partners gathered that preschool programs pave the way for academic success.

“The educational foundation starts with early childhood,” ECE Director Ricardo Rivera said. “Our district is very understanding and supportive of that concept.”

Rivera described how the program has pioneered preschool bilingual education, with a Spanish/English immersion program at two sites, and adopted a new curriculum that will go into effect in 2017-18.

The program also saw strong parent reaction to the pilot of an all-day program – a current focus of the federal program.

“It’s been extremely successful. The future for us probably includes an additional expansion of this model,” Rivera said.

Parent Monique Rodarte, who serves as chairperson of the ECE’s Policy Council Board, said the all-day pilot allows children – including her son – to attend from 8 a.m. to 2:30 p.m. The pilot program supports preschool efforts to prepare children for kindergarten.

“Students have more time in the classroom and access to education and some students, like my son, can also have a working mom,” Rodarte said.

Rivera said new portable classrooms at Geddes and Heath elementary schools will support the expansion of full-day programs in 2017-18, and a third site could be established.

He also noted that the ECE program collaborates effectively with transitional kindergarten (TK) and kindergarten programs, ensuring children are placed in the program that will best serve them. Some districts, he noted, have seen preschool programs struggle as parents shift children to TK classes, but Baldwin Park Unified remains at full enrollment.

Superintendent Froilan N. Mendoza, who started at Baldwin Park as the ECE director, said early learning programs have the power to transform a child’s academic future.

Baldwin Park Unified’s program has a long history, stretching back to 1942. The District was among the first in the nation to adopt Head Start in 1965, and also one of the first to adopt Early Head Start, which helps pregnant mothers and children ages 3 and younger.

A key to the program has been strong parent involvement and community partnerships. This year, 97 percent of families have created family education goals, which include additional education efforts by parents.

“We can’t do this by ourselves,” Mendoza said.