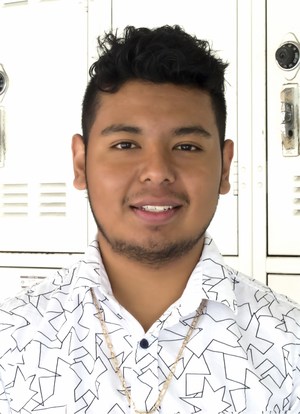 Valenzuela, who came to America for medical treatment four years ago, said he was moved to a career in service after seeing the emotional struggles of families awaiting transplants.

“It’s hard for them,” he said. “I want to help people in that situation, people whose situation was like mine. I want to help families and children.”

The $500 scholarship was created in honor of Daniel Carlos Herrera, a high school graduate who died in a motorcycle accident in July 2001. It is awarded annually to two students who are pursuing careers in education or community service with a focus on serving an ethnically diverse society.

To qualify, students must be bilingual in Spanish and English or have a Native American tribal affiliation, and should be students who have overcome academic or personal obstacles. Valenzuela, who is bilingual, will receive the scholarship at a dinner on Saturday, April 29.

“I never imagined I would win,” Valenzuela said.

Valenzuela said his life has been transformed since he received his transplant in fall 2016. Now, he can participate in sports and he feels stronger every day. He plans to attend Mt. San Antonio Community College after graduating from Sierra Vista High, the first step on his path to becoming a psychologist.

“Rogelio’s story is one that inspires all of us to do our best for our community,” Superintendent Froilan N. Mendoza said. “When faced with challenges that would defeat many people, he kept a positive attitude, and is focused on how he can help others with what he has experienced.”