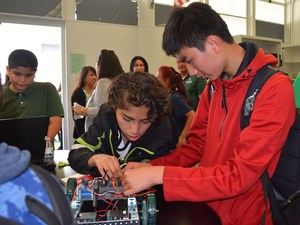 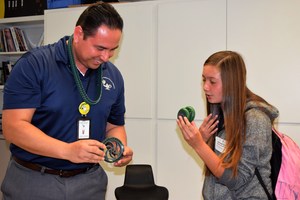 Baldwin Park Unified’s Holland Middle School students celebrated the grand-opening of two STEM labs May 5 by sharing their work on robotic cars, computer coding and 3-D models of a foot orthosis piece with families and board members. Holland offers courses in engineering design and modeling, as well as automation and robotics designed by Project Lead The Way, the nation’s leader in STEM curriculum. Next year, three more STEM courses will be offered.

“In school, you normally learn the very basics of math and science, but you don’t go too far into one area,” Holland sixth-grader Leilany Gamboa said. “In STEM, we are taught to succeed through trial and error. I am the wire technician in my group for automation and robotics. I never thought I would enjoy it, but now I know so much more and it’s really fun.”

Holland offers one-semester courses in engineering design and modeling, as well as automation and robotics designed by Project Lead The Way (PLTW), the nation’s leader in STEM curriculum. Next year, Holland will add PLTW courses in Flight and Space, App Design and Medical Detectives.

At the grand opening, more than 40 parents, district officials and Superintendent Froilan N. Mendoza were given student-guided tours of a STEM lab. Students tinkered with two- and four-wheeled vehicles to show the pieces involved in programming machine automation. This included creating a model with robotic kit pieces, wiring the car and coding it to run via remote control.

“The job of the district is to make sure students have the tools in hand necessary to success,” Mendoza said. “With our partnership with Project Lead The Way, we are setting up our students to thrive in a technology-based environment.”

Eighteen-year educator Tom Lau, who started teaching the PLTW courses about 18 months ago, said the program has evoked a newfound excitement for teaching.

“If I had these classes in junior high school, it would have changed my career path,” Lau said. “Students have the required skill set, but they aren’t given the opportunity to apply those skills to a career field. This is the first time students are exposed to courses in engineering, and through their lessons they are being prepared for jobs that will need to be filled in the next 10 years.”

Kimberly Jones, PLTW director of school engagement for the west region, described how the nonprofit organization works to inspire, engage and empower the future generation of engineers, mathematicians and scientists.

Holland Principal Mike Rust said a long-term goal is to ensure that every Holland student enters high school with experience in at least one STEM course.

BPUSD_STEM_1: STEM students from Baldwin Park Unified’s Holland Middle School adjust wires on their robotic car during a grand-opening celebration of two STEM labs on May 5. Partnered with Project Lead The Way, the District created new labs to accommodate courses in engineering design and modeling, and automation and robotics.

BPUSD_STEM_2: Holland sixth-grader Leilany Gamboa took board members and parents on a tour of the new STEM labs to demonstrate what the automation and robotics course entails. Gamboa talked visitors through the steps for creating robotic cars and provided information on her job as the wire technician.

BPUSD_STEM_3: Kimberly Jones, Project Lead The Way’s director of school engagement for the west region, saw her organization’s work in action while touring one of the STEM labs at Holland Middle School on May 5. A student from the engineering design and modeling course described his prototype of a 3D model foot orthosis piece for patients with cerebral palsy.