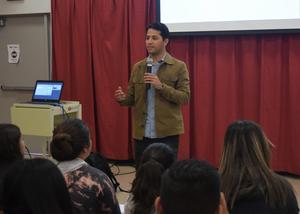 Sierra Vista Junior High students spent the morning with Andres Chavez, the grandson of human rights activist Cesar Chavez, to learn about the legacy of the “іSí se puede!” movement.

“The lesson I learned from my grandfather is that you don’t have to be rich or powerful to make a difference,” Chavez said during his visit to the school. “You only lose when you give up. The next Cesar Chavez is in this room.”

Chavez, who is director of strategic initiatives for the Cesar Chavez Foundation, recounted the elder Chavez’s life and legacy, from his childhood working as a migrant during the Great Depression to his role in creating the National Farm Workers Association in 1962.

Chavez’s accomplishments serve as an inspiration for SVJH eighth-grader Samantha Carlos, who takes the civil rights leader’s beliefs to heart.

“I believe that everything is possible if you keep trying,” Carlos said. “When I see injustice, I want to fight it. We can learn from our mistakes and not repeat them in the future.”

Sierra Vista Junior High seventh-grade English language arts (ELA) students have recently studied about Cesar Chavez and were thrilled at the opportunity to meet an heir to his legacy.

The interest in bringing Andres Chavez to the school was so widespread that additional assemblies were held so eighth-graders could attend as well.

“It’s rare that you have the opportunity to bring in a speaker that students can connect so well with, and it is an honor to have Andres Chavez come to Baldwin Park to share stories about issues that matter deeply to our students,” Superintendent Dr. Froilan Mendoza said.