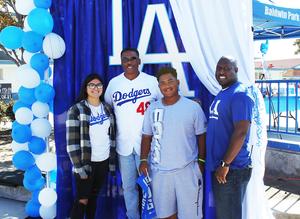 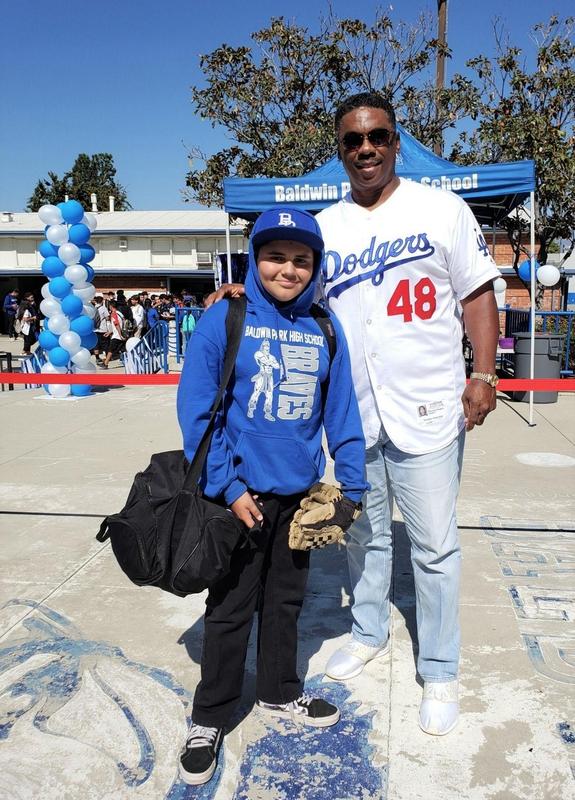 “Our administration has made a great push for all schools to implement PBIS, and our kids have really worked hard to make it successful,” BPHS Assistant Principal Cedric Parks said. “Dodger Day helps raise even more awareness. It’s a fun day and we received a lot of support from the Dodgers.”

Baldwin Park students posed for pictures with Powell, who was a 21-year-old lefthander when he first pitched for the Dodgers in 1985. Powell spent two years with the club before being traded to the Seattle Mariners. He also played a year in Japan.

Students and staff were encouraged to take pictures and post them on social media with the hashtags #DodgersAlumni and #Dodgers.

Through PBIS, students earn Braves Bucks for displaying positive behavior in the classroom, hallways, quad and at after-school activities. Braves Bucks can be awarded by teachers, administrators, staff, and even campus security aides.

Every two weeks, the school’s PBIS club holds a raffle in the library, where they have given away hundreds of prizes, including gift cards and once, as a grand prize, a pair of Beats headphones.

“We are looking to create a student store where we can redeem Braves Bucks for school supplies,” BPHS junior and PBIS club President Brianna Garcia said. “This is important because having a support system that focuses on good things creates positive expectations that reverberate throughout the campus.”

“Positive behavior brought me to a place where I was supported and I found the skills which allowed me to excel,” Powell said.

Powell’s path to being a professional ballplayer was spurred by the kindness of a stranger. Growing up in Georgia, Powell had never played baseball until a man approached him and asked if he wanted to join a sandlot team.

“It’s a team concept – positive awareness results when you are willing to help someone, motivate them to do better,” Powell said. “I’m proud of these kids. They are committed to success.”

Eighteen Baldwin Park Unified schools have been recognized with silver and bronze medals from the California PBIS Coalition for encouraging safe and supportive learning environments. This is the fifth year that PBIS strategies have been used at the District.

“The success of PBIS can be seen throughout the District, and students and staff are finding creative ways to continue rewarding positive behavior,” Superintendent Dr. Froilan N. Mendoza said. “It means so much to our students to see a professional athlete taking the time to visit with them and celebrate their accomplishments.”