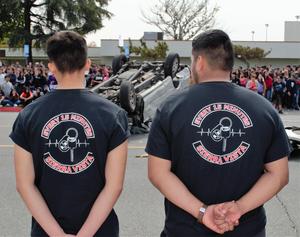 Presented to Sierra Vista High School juniors and seniors on March 26-27, “Every 15 Minutes” shows the lethal consequences of driving under the influence of alcohol or drugs

BALDWIN PARK – Car parts and broken glass littered the street in front of Sierra Vista High School while a student posed as a corpse lay atop the hood of a vehicle – a stark and unforgettable start to the “Every 15 Minutes” two-day program.

Presented to Sierra Vista High School juniors and seniors on March 26-27, Every 15 Minutes shows the lethal and unforgiving consequences of operating a vehicle while distracted or driving under the influence of alcohol or drugs by displaying a trio of scenarios, beginning with a simulated car crash.

“I was selected as one of the living-dead students and I didn’t expect it to impact me the way that it has,” Sierra Vista senior Anthony Anibal Delgado said. “Learning this lesson makes you want to spread the word.”

Throughout the day, the Grim Reaper pulled the 21 students from classes to join the living dead. The students took part in an overnight retreat to reflect on the event and to write farewell letters to parents and family.

On March 27, a mock funeral was held for the living-dead students, with students and families gathering to watch a short film on the previous day’s events. Speaker Joshua Jahn shared his personal story of loss to give life to the people behind the statistics. Jahn’s wife, 3-year-old son and 11-month-old daughter were killed when a drunk driver going more than 70 miles an hour hit his family’s car. He now works to prevent similar devastations in the future.